He can run Source-Connect, bridge to ISDN, join an ipDTL session, call you on your cell, use Skype, however you want to connect.

His rates are reasonable (and based on the GVAA rate guide).

The Beginning: Behind the Desk

Ever since I was small, I’ve been enamored with the idea of voiceover. Being a lonesome child raised in the woods of New Market, Maryland, I gravitated towards and fell in love with cartoons and video games. Like everyone else I knew growing up, I especially loved (and imitated) the Simpsons, a treasure trove of character, humor, scripting, and outright quality. However, I hadn’t dreamed I could actually make a living doing voiceover. It seemed to be the calling of a scant few monolithic talents in LA, forever out of reach.

Instead, I got a safer, more responsible (?) degree in English – writing, specifically – and worked many different jobs (none involving writing, incidentally). The decision to ignore my dream job shaped my 20’s – a life of boring office monotony.

The Recent Past: The Acting Bug Strikes

One day in 2013, I did something scary. I auditioned for a play. The honor was mine to portray real-life Pinkerton detective Frank Geyer in the Baltimore Rock Opera Society production of Murdercastle. I soon realized that “voice actor” was what I wanted to be when I grew up, and this was as close to growing up as I was going to get. Since then, I’ve managed to appear in TV shows, film, theatre, commercials, and podcasts. Soon after all that, I focused down solely to voiceover, for which I’ve found to have my singularly strongest affinity and talent.

The Present: Voiceover is My Business

Now in my 30’s, work is not a job. It’s an identity, a choice I have to make every day. I often tell people looking for advice on how to get into voice over that it’s a lifestyle. And learning the business is just as intricate and detailed and massive a task as learning to perform voiceover itself. Luckily, I like a challenge and was dumb enough to quit all my other jobs, so I was able to learn (and continue to learn) both sides of the trade. Not everyone is built to take risks like that. It takes talent, skill, luck, timing, money, and a pretty huge skill set that has nothing to do with acting. It’s a marathon, and eventually you learn there aren’t any shortcuts. I take strides every day in order to improve my abilities, my business acumen, and the value I provide to my clients. Today, I can promise broadcast-level audio with a competitive turnaround and a rate that’s fair and doesn’t shortchange either of us. I can talk shop on technique, gear, audio engineering, or what’s going on the VO world.

Voice over is my business. An identity that I choose, every day. 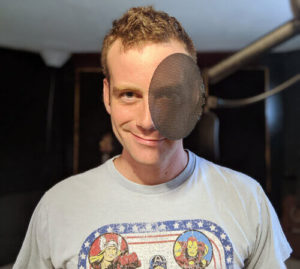 The Future: Behind the Mic

I look forward to the decades of work ahead of me. New challenges, new genres, new mountains to climb. I’m behind the mic from now on. Shall we make something good together?

The fall of an Empire

The True No Man's Sky Community

Be a Good Neighbor | Ariens

…First and foremost, Rex is one of the most responsive professionals in his field. You can tell he has a genuine passion for his work and helping make videos come alive. Second, his voice is naturally smooth and assuring, so he makes for a great narrator for a corporate or explainer video. And lastly, he makes the extra effort to ensure his client is satisfied by providing multiple recordings upon his first take, giving production managers like me plenty to work with…

I have worked with Rex on more than one occasion, and each time he has excelled at his ability to portray the characters and lines I have written for the game trailers I hired him to voice. His remarkable tonal delivery and talent for creating quality voice overs is sure to be noticed by anyone who hires him to voice their next project. I highly recommend Rex.

Awesome! Great turnaround. Total pro. So good to work with.

Rex delivered great results and in a very short turnaround. He was quick to jump on my edit requests and hit my exacting notes on tone and take. It was a pleasure!

Great experience working with Rex. He responds quickly and works well with our feedback.

Great work Rex! You really nailed this part. Looking forward to more jobs with you in the future.

Rex did a fabulous job on our video. He was responsive to our every request. Thanks Rex!

What a pro! Looking forward to working with Rex again!!

GREAT Voice Over Artist. We will work together again very soon for sure.

Really great voice actor! Will recommend to anyone who requires voiceover.

Despite a short deadline, Rex provided all needed audio recordings very fast, and exactly as we requested them. The quality was top notch and I would work with him again. Definitely recommend him!

Rex has done a perfect job, I highly recommend him. He is a real professional with excellent voice and great communication. I will definitely work with him again.

Rex has done an awesome job again. I am looking forward to continue working with him.

Rex took the limited direction I gave him and turned out 3 separate audio takes that allowed me to put together just the right radio spot. Highly recommend him!

Rex! Absolutely fantastic job…You take direction very well, and your voice sounds awesome. Thank you for everything! We hope to work with you again soon.

Rex did an amazing job on a character for our mobile game project! Would definitely hire him again!

Rex is a highly skilled, versatile and professional voice over artist. We recommend Rex without hesitation.

Awesome job! Great to work with and all of his lines were well delivered. Would definitely work with Rex again.

Rex handled our project with absolute care and professionalism. Do everything in your power to work with Rex.

Rex! Absolutely fantastic job…You take direction very well, and your voice sounds awesome. Thank you for everything! We hope to work with you again soon.

Rex Anderson is a through and through professional that gets the job done quickly and professionally. I like when I can just hang back and let the talent do the job because they know what they are doing. It was a breeze to work with him and I look forward to working with him in the future.

Rex is my go-to voiceover guy and every time he crushes it. He’s friendly, reliable, and super easy to work with. He gives a variety of different reads, inflections, and he takes direction very well. He’s a talented dude and paired with his positive attitude, he’s unstoppable. I can’t recommend him enough.

Excellent voice over, Rex does this character well. Recommended for your future productions. Excellent character actor. Loved what he did to our creature 🙂

Is there a voice this guy cannot do?! Excellent acting and detail. I’m happy every time I see him audition because I know I’ll get the best.

Faced with finding out our original talent was sick the morning of the shoot, Rex was recommended to us through a local producer…Stepping in and delivering almost 5 minutes in lengthy walk-and-talk script flawlessly, needless to say, we were more than impressed. Rex has a great voice and presence on set, and very easy to work with. I will not hesitate to use him again and can with no doubt recommend him to others.

Thanks for a great voice!

Your Efforts Add Up…But Only If You Make Them

My best friend and his wife visited this weekend to see my band Random Battles play and see our beautiful new house and of course Aria, and we had an in-depth conversation about reconnecting with our past selves as a way of moving forward in our lives. Highlighting the people we’ve met, the friends we’ve

One of my fondest video game memories is the 90 hours or so I plunked into Final Fantasy VII as a kid. The whole first act of the game takes place in Midgar, an oppressive, gloomy city, carved out in claustrophobic corridors. It’s dank, trashed out, and the sun literally never shines there. There’s a

Circlin’ The Wagons Back to Those Old Freelance Sites

Fiverr. Upwork. Mandy. Guru. I’ve been revisiting my entire structure lately, figuring out how to make something more sustainable and consistent, and less reliant on commercial work. Which is fantastic, of course, but not the most…well, consistent. Or reliable. And reliable is what I need now that I have a baby and I’m kinda freaking